Paid or organic traffic? That is the question every Shopify merchant has to ask. It is even harder to answer for those just starting out. If a store is brand new, then paid traffic is likely the quickest way to build up an audience and let yourself known to the world. If you are going to use paid traffic, then you need to know about ad exchange, ad network and how to use them to your advantage.

What is ad exchange?

Ad exchange, in its online sense, is a platform that allows the buying and selling of advertisements between publishers and advertisers. Publishers are those selling spaces on their sites for ad placement (these spaces are also called ad inventories or ad units) while advertisers are those buying such places. Ad can be of various types: Banner, text, video, etc. 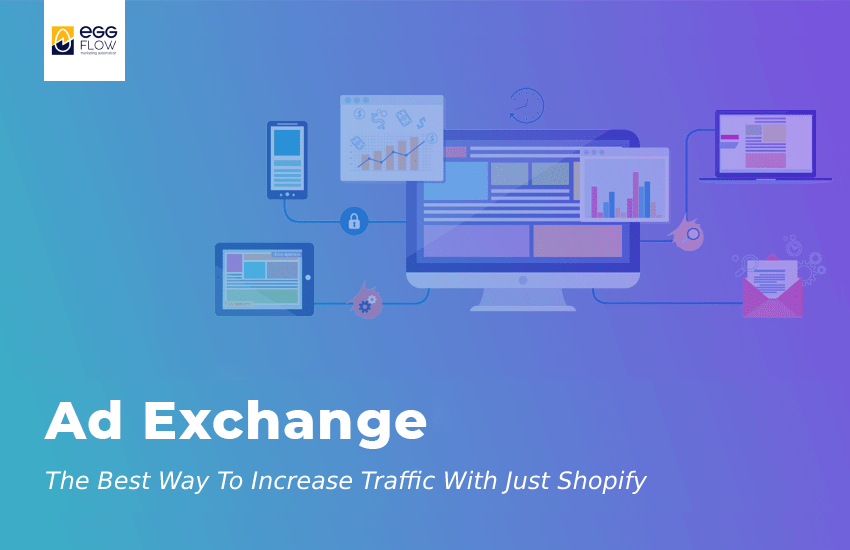 How does ad exchange Work?

On ad exchange platforms, ads are auctioned by each impression via the real-time bidding method or RBT (similar to live online stock markets). How can the system handle all the bid and ad requests? Let’s take a look at a simplified explanation:

When an Internet user visit a site and load a page, a request will be made announcing that there is a space (or more accurately an impression) for ad available. The request is then delivered to many advertisers, who will bid on it in real-time. The advertiser with the highest bid wins and the publisher’s site will display the winning ad right away. The platform then repeats the process for every single space available on that page.

But if all that work is done manually, then it will take too long for an ad to load. While the website still deciding which ad to display, the users would have closed the tab already! That is why the whole process is automated and advertisers only need to set the budget for their campaign and let the system handle the auctions. Usually, the auctions happen so quickly (about within 100 millisecond) that you won’t even notice it while browsing the Internet.

The different types of ad exchanges

There are two types of ad exchange:

Open Exchange: As the name implied, this is the public version of ad exchange. Any advertiser can buy ad units from any publisher that is available on the market.

Private Exchange: Private exchange means it is only available to those invited into the circle. What’s good about private markets is that they are usually very targeted with a clearly defined audience, thus raising the effectiveness of ad delivery. Since advertisers and publishers know each other well, it also reduced the chance of fraud. Generally, private markets are considered to be of higher quality than the open market.

These two terms are similar in that there is an ad-buying side and there is an ad-selling side, yet they are not the same. What makes them different is the way they connect ad buyers with publishers. Depend on your business, one method may be more suitable than the other.

Ad networks are companies that connect ad buyers and publishers. They typically do this by pulling and grouping different publishers’ ad inventory into categories that match advertisers’ demand, then sell that ad supply in a bundle with a margin for profit. Ad network is like an intermediary while ad exchange is a marketplace where people are free to buy and sell. The two are not exclusive and can work closely together. Google ad, for example, will connect you to their ad exchange publisher sites automatically if you target your ads at the Display network.

Compared to a network, the advantage of ad exchange is that you can clearly see where your ads are placed. Most ad networks won’t let you know exactly which sites your ads run on, and only give you a general fixed Cost Per Mile. On the other hand, ad network saves you a lot of work and time since you don’t have to work with each site separately. In addition, there are ad inventories that is available on one platform only.

If you don’t know this yet, there are Shopify ad exchange circles that you can join.

Shopify ad exchange is an ad circle where the participants are all Shopify store owners. It is different from the ad exchange system described above in that it takes a more literal sense of the word “exchange”. You allow other Shopify stores to advertise their products on your store and in return, you get to advertise on their site with no cost involved. The more impressions you bring to your partners, the more of your ads get to be displayed.

There is no need for complicated set up to join a Shopify ad exchange as you would only need to install a traffic exchange app.

Below we will discuss the most popular and notable ones. The basis of those apps is as mentioned above. If an ad does not get clicks, then the app algorithm will show it less and less while prioritizing better performing ads. So the more you give, the more you will be able to take.

With more than thousands of merchants joining the ad circle, Instant Traffic is one of the best traffic exchange apps around.

> For a more in-depth review of Shopify traffic apps, see “The Best 5 Shopify Traffic Apps To Drive Traffic To Your Website“

Regardless of what type of business you run, you still need to know about ad exchange. Even if you have an inventory-free model like Shopify dropshipping, a major part of the job is still finding an effective marketing channel, and paid ad is arguably the fastest and easiest way to reach customers. This is even truer nowadays when people are spending more and more time online.

Eggflow Content Executive
She enjoys researching and writing blogs about marketing and e-commerce.
Send her a friend request on Facebook! She loves getting in touch with her readers.
Ask her anything on Quora: https://www.quora.com/profile/Felicia-Nguyen-20

What is CRO? How to boost Shopify conversion rate optimization?

What is Shopify? How to sell on Shopify?

How To Write The Best About Us Page For Your Website?